I am in Amsterdam now, doing research for Eye of the Beholder, having traveled directly here after TED Global ended on Friday. I had thought I would blog throughout the meeting, but it was all so intense and non-stop that I preferred to just live it and reflect on it afterwards. Just a few thoughts now, and more later as they come to me.

It was a whirlwind of talks, social events, and chatting with new friends. Many of the talks I heard were mind-blowing in some way or another; I met a large group of amazing, intelligent, curious, and accomplished people; and the parties (and after-parties) were lavish!

By the time of my talk I was still nervous, but I had already seen that the audience is so receptive and eager to hear what the speakers have to say. As I climbed the stairs to the large stage after being introduced I felt so much positive energy washing over me. As I looked out at the huge audience I recognized many of my new friends, and saw how ready everyone was to hear my story about the philosophical breakfast club. It was so much fun to tell it, and the feedback afterwards was amazingly positive. What was thrilling was how fascinated this group of non-academics and non-historians were by the philosophical and historical story I wove for them. 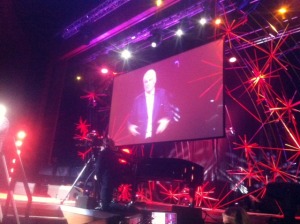 Bruno Giussani introducing me on the stage of TED

You can see the description of my talk—and two photos of me while on the stage—on the TED blog here.

Cartoon of my TED Talk

Notes on Preparing for TED Global

The Philosophical Breakfast Club at TED Global This June!!!