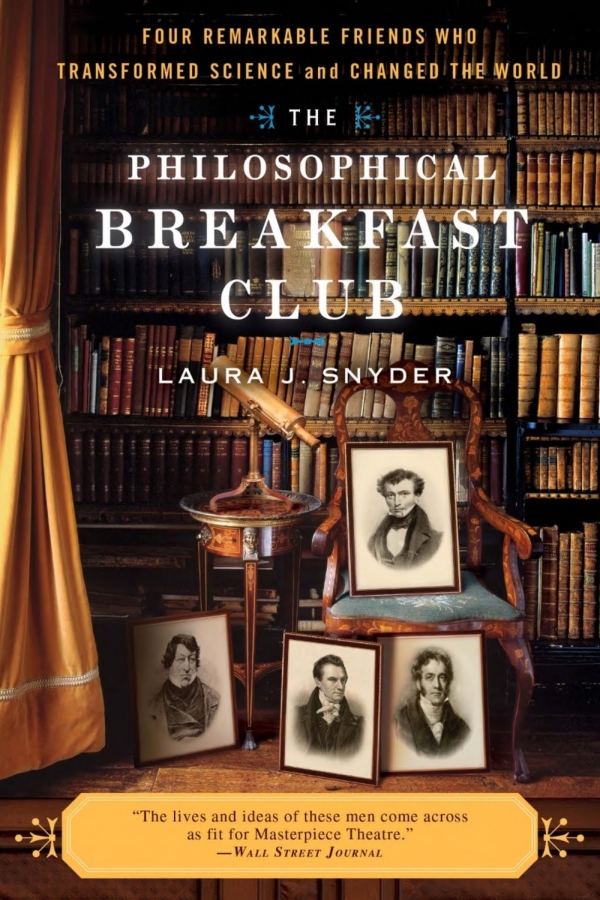 The Philosophical Breakfast Club tells the story of the life and work of four men who met as students at Cambridge University in the 19th century: Charles Babbage, John Herschel, William Whewell, and Richard Jones.  Recognizing that they shared a love of science (as well as good food and drink) they began to meet on Sunday mornings to talk about the state of science in Britain and the world at large. Inspired by the great 17th-century scientific reformer and political figure Francis Bacon—another former student of Cambridge—the Philosophical Breakfast Club plotted to bring about a new scientific revolution. And to a remarkable extent, they succeeded, even in ways they never intended.

The lives and works of these men come across as fit for Masterpiece Theatre.

A fascinating story, one told with considerable charm.

This fine book is as wide-ranging and anecdotal, as excited and exciting, as those long-ago Sunday morning conversations at Cambridge.  The Philosophical Breakfast Club forms a natural successor to Jenny Uglow’s The Lunar Men (which focuses on 18th-century chemist Joseph Priestley, inventors James Watt and Josiah Wedgwood, and polymath Erasmus Darwin), and Richard Holmes’s The Age of Wonder.

Laura J. Snyder deftly recreates this age of marvels through the lives of four remarkable Victorian men. In doing so, she tells a greater tale of the rise of science as a formal discipline, and the triumph of evidence-based methods of inductive reason…Much of the delight of Ms. Snyder’s telling lies in her eye for details…a sure-footed guide to the mores and foibles of 19th-century Britain…The members of the Philosophical Breakfast Club left behind some lavish gifts. This volume offers them up delightfully.

Laura Snyder tells th[e] story in her fascinating book The Philosophical Breakfast Club about the way four geniuses at Cambridge University revolutionized modern science to create the many disciplines that exist under that rubric today.

Snyder writes with the depth of a scholar and the beauty of a novelist.

[Snyder] leaves the reader with an inspiring sense of just how influential these men were in shaping our world and laying the foundation for major science and technological changes. The call to action is clear: bring the arts and the sciences  back to the breakfast table and raise a mug of ale in memory of the four Victorian scientists who changed the world.

In Snyder’s able hands, the intertwined lives of the four Cambridge friends become the stuff of a Trollope novel . . . . she deftly interweaves snippets from the letters with lucid explanations of the science involved and with scenes from 19th-century British life . . . . Focusing on the correspondence also allows Snyder to blend intellectual and family registers, just as her protagonists did in their letters. She is alert to nuance and sensitive to what is unsaid as well as said . . . . Snyder succeeds famously in evoking the excitement, variety and wide-open sense of possibility of the scientific life in 19th-century Britain . . . splendidly evoked in this engaging book.

Truly remarkable . . . . If you want a good entertaining, informative and stimulating read, then this is highly recommended.

A striking account of how a few bold individuals catalyzed profound social change.

A masterful portrait of science in the 19th century

The author’s extensive research, wonderful writing, and passion for lifelong learning all serve to awaken the reader’s inner spirit of discovery.

Engrossing…Packed with good stories and anecdotes, as well as with good science and history

Each of the four figures is a worthy subject in his own right, and by combining their stories Snyder provides the right balance of biography and science. It also allows Snyder to discuss a wide range of scientific developments that are sufficiently modern to appeal to today’s readers.

The author skillfully weaves together the lives of her four principals with the science of their day.

An accessible and engaging read on the origins of Victorian science, its personalities, and the cultural contribution made by these four men, this will appeal to readers interested in Victorian science, biographies, astronomy, chemistry, the religion vs. science debate, Darwin, computers, and a smorgasbord of related sciences.

If, like me, you loved Jenny Uglow’s The Lunar Men or Richard Holmes’s The Age of Wonder, prepare yourself for the pleasure of further intellectual pursuit in this lively group biography of four men—Charles Babbage, John Herschel, William Whewell, and Richard Jones—who met at Cambridge University and spurred each other on to pioneering achievements in crystallography, mathematics, computing, astronomy, and economics.

Cambridge University has schooled many great scientists. Historian Laura Snyder explores the friendships between four men who met there in the 1810s: Charles Babbage, inventor of the computer, astronomer John Herschel, crystallographer William Whewell and economist Richard Jones. Inspired by their seventeenth-century forebears, including Francis Bacon, they founded a breakfast club, where they plotted to revolutionize science. Drawing on their correspondence, Snyder describes how they did just that.

NatureFeatured in Books in Brief Section

The Philosophical Breakfast Club is a beautifully written and elegantly composed story. . . . [The book] presents a wonderful portrait of science and university life in the period—the trials and tribulations of trying to be a scientist before professionalization. It nicely evokes the broad interdisciplinary that was taken for granted then and is so rare now. Its contextualization of the first half of the nineteenth century in Britain is outstanding, and it is highly successful in showing the deep intertwining of culture and society with the club members’ work.

ISISJournal of the HIstory of Science Society

ChoiceJournal of the American Library Association

An extraordinary book….Snyder takes us from the early meetings through the careers and marriages of the four and to the end of their amazing lives. The narrative sparkles with personal details, political fights, love, brilliant discoveries, hard work, science and math, always focusing on the four protagonists.

A unique view of the background and times in which these men lived, and a peek at the implications that their work and philosophy had on today’s modern science.

Multidimensional and rich with the sentiment of the time….a well-blended rendition of friendship and modernization, starring four intellectual soulmates.

Snyder skillfully combines biography with history of science. She has managed to produce an educational, entertaining, and never boring book that provides insights into some of the most remarkable episodes in the history of science. Especially remarkable is the ability of this author to paint an intuitive and lively picture of the diversity and richness of the natural sciences before Darwin. . . . The revolution for which Whewell and his friends were responsible . . . quickly became part of scientific routine, and its protagonists were, unjustly, largely forgotten. (In German)

Snyder paints a vivid picture of a revolution in scientific thought. . . . Its portrayal of a world and time much different from our own is remarkable, and Snyder spares no expense in immersing the reader into the world that produced these natural philosophers.

Eye of the Beholder
Scroll to top