A wonderful new review by Judy King of Story Circle Book Reviews, a website devoted to reviews of books “by, for and about women.”

“In The Philosophical Breakfast Club, Laura J. Snyder has written a brilliant book. Pure and simple. It is the story of the birth of ‘the scientist,’ both the term itself, and the concept of a professional person dedicated to the scientific study of a particular subject. . . . The numerous accomplishments and contributions of the four men would be too many to list in a brief review of the book. Suffice to say that our world would bear no resemblance at all to what we are used to if they had not been so broadly engaged in the applications of science, as well as its study. . . . A highly engaging study.”

You can read the full review here. 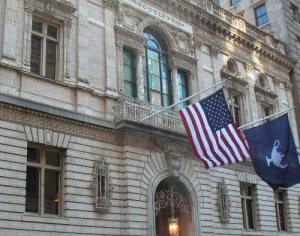 I am looking forward to tomorrow’s “Food For Thought” luncheon and talk at the Century Association in New York City, sponsored by Cambridge in America. There is still time for Cambridge University alumni and guests to register at www.cantab.org! For more information, and to register, see here.

The Arnold Arboretum of Harvard University has put out a lovely poster advertising my upcoming talk:

I am looking forward to my visit to the Arboretum, and would love to see friends and fans of The Philosophical Breakfast Club there.

I’ve just checked in to The Philosophical Breakfast Club’s page on Amazon.com, and was happy to see that in the last couple of days I’ve received four new reviews—all five-star reviews. The titles of the reviews are great: “Brilliant Book!” “Intellectual Feast,” “Four Friends and How They Kickstarted Modern Science,” and the very sweet and succinct “Thank You So Much.” Once again, I am very grateful to readers who take the time to write reviews and post them up on the Amazon site and elsewhere. Thank you all! Read the reviews here.

The paperback has been selling very briskly—my publisher is thrilled! In fact, Amazon.com just ran out of their copies. But the book will be back in stock on April 6, and is still available at BN.com and, of course, your local independent bookseller.

I was happy to see that The Philosophical Breakfast Club made it onto the Washington Post “New in Paperback” column!

You can read the story here.

I was pleased to see The Philosophical Breakfast Club as one of four books highlighted in the February issue of United Academics, a “Monthly Popular Science Magazine,” published out of The Netherlands. I wonder if my new association with a Dutch publisher (for the new book, Eye of the Beholder) has anything to do with this? It’s funny that a book about four friends who together changed science is featured in an issue on the theme of “Splendid Isolation”—as is a book about love and sex!

You can see the Books Page of the magazine here.

One year ago today I was nervously waiting to see how The Philosophical Breakfast Club would fare once it was released into the world that day.  I have to admit that I wondered whether it would “fall stillborn from the press,” as David Hume said of his Treatise of Human Nature.  I couldn’t imagine how fortunate my book would be in finding its audience right away.  I am grateful for all the readers who took the time to write reviews for Amazon, Goodreads, and the other internet sites.  I also appreciate, very much, those who reviewed the book for newspapers, magazines, and journals.  It was incredibly gratifying to see the wonderful reaction to the book by people who read and review books for a living!

Some of my favorite lines from the published reviews: “Snyder writes with the depth of a scholar and the beauty of a novelist” (Science News); “The lives and ideas of these men come across as fit for Masterpiece Theatre” (Wall Street Journal); “A fascinating story, one told with considerable charm” (Washington Times); “The members of the Philosophical Breakfast Club left behind some lavish gifts.  This volume offers them up delightfully” (Economist);  “A natural successor to Jenny Uglow’s The Lunar Men and Richard Holmes’s The Age of Wonder” (Washington Post); “Snyder succeeds famously in evoking the excitement, variety, and wide-open sense of possibility of the scientific life in nineteenth-century Britain” (American Scientist).

Heartfelt thanks to my readers, reviewers, my wonderful editor Vanessa Mobley, my incredible agent Howard Morhaim, all my friends who celebrated the book’s launch with me at the Lotos Club last February 22nd, and my son Leo, who was so excited he did a special “book dance” when we first saw The Philosophical Breakfast Club on the New Non-Fiction table at the Barnes and Noble earlier that day.  It’s been quite a year!

I’m just back from my trip to Vancouver, where I talked about The Philosophical Breakfast Club in front of two great audiences. On Thursday afternoon I lectured on “The Philosophical Breakfast Club and the Invention of the Scientist” at the University of British Columbia. The talk was sponsored by The UBC Nineteenth-Century Studies Association, the Department of History, and the Science and Technology Studies Graduate Program. It was a very interdisciplinary audience of philosophers, historians, literary scholars, and scientists. Lots of great questions during the Q & A!

The next morning I was interviewed by Susanne Bard for Science Update Radio of the American Association for the Advancement of Science. She asked me about the meaning and importance of science for the public good today, and how scientists in the 19th century promoted this idea under the influence of Francis Bacon. I’ll post a link here to the podcast when it is online.

Then I went to take part in a AAAS session on “Creating a Global Knowledge Society: Lessons from History, Philosophy, and Sociology,” organized by my colleague Heather Douglas of The University of Waterloo. I spoke first, on “Global Science and the Public Good in the 19th Century: Tidalogy, Meteorology, and Magnetism.” I discussed the way in which William Whewell and John Herschel spearheaded global science efforts in studying the tides, weather patterns, and terrestrial magnetism, as a way both to gain understanding of the fundamental forces of nature and improve the public good through improvements to navigation.

The other speakers were Alan Richardson of UBC, and Edward Hackett of Arizona State University, with commentary by Heather Douglas. It was a large and engaged audience, and it was nice to see some old friends there, and to meet some readers of The Philosophical Breakfast Club!

The video of my Dibner Library Lecture in December is now available online, here.

Although it was dark in the room, and I had to wear the microphone power-pack on the back of my collar, you can see and hear me well. The audio/visual folks did a great job!

I really enjoyed giving this talk—it was such an engaged audience! Thanks again to the Smithsonian Institution for the invitation, and to everyone who braved the torrential rain to attend.

The most recent edition of the History of Science Society newsletter highlighted the Dibner Library Lecture I delivered in December. If you scroll to the bottom you will find a link to the other Dibner Library Lectures that are available on the website of the Smithsonian Institution, those by Joyce Chaplin, Albert Van Helden, Ken Alder, Anthony Grafton, Owen Gingerich, and others.

You can read the article here.

The written version of my lecture will be available online as well. I am currently working with the head of special collections at the Smithsonian, Lilla Verkedy, to find images from their books and other materials that we can use to illustrate the lecture. It should be lovely when it is finished!