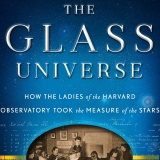 Williamina Fleming, who had originally been hired by the head of the Harvard Observatory as a maid, devised a classification system of 10,000 stars. Laura J. Snyder reviews “The Glass Universe” by Dava Sobel.

When astronomer John Herschel captured the first glass photograph in 1839—a picture of his father’s 40-foot telescope—he could hardly have imagined that before century’s end stargazers would be able to glimpse on glass the entire firmament. In “The Glass Universe: How the Ladies of the Harvard Observatory Took the Measure of the Stars,” science writer Dava Sobel recounts the story of a group of remarkable women who read the secrets of the skies on glass photographic plates, discovering new worlds in the heavens while forever altering the scientific world below.

In the 1880s, the Harvard Observatory was led by Edward Charles Pickering, an astronomer focused on photometry: measuring the perceived brightness of stars. Up to this time, Ms. Sobel explains, “brightness, like beauty, was defined in the eye of the beholder.” Pickering aimed to establish a scientific scale for brightness—a project requiring thousands of calculations based on stellar observations.

It was too much work for Pickering and his all-male team of astronomers to handle on their own. Unlike other observatory directors, Pickering hired women as “computers”—a term applied, in the days before electronic computing, to people who performed long series of mathematical calculations using a fixed procedure. For instance, starting from the star Polaris’s arbitrarily given brightness, or “magnitude,” of 2.1, one of Pickering’s computers, Nettie Farrar, calculated to two decimal places relative-brightness values for all the other stars observed by Harvard’s male astronomers.

Over the course of six decades, many women passed through the observatory—and many pass through the pages of Ms. Sobel’s book. One of the most significant among them, at least in terms of the work of the lab, was Anna Palmer Draper. In 1883 she visited Pickering and brought a set of glass photographs taken through a telescope by her recently deceased husband, Dr. Henry Draper.

Pickering realized that the stars could be studied more accurately by telescopic photography than by telescopic observations because the photographic plate, unlike the human eye, could collect light over time, allowing even the faintest stars to become visible. In a test of one quadrant of the sky, Pickering saw 55 stars through the telescope, while 462 were found on a glass photograph.

Mrs. Draper offered part of her considerable fortune and her husband’s telescopes to facilitate the continuation of his work—the study of stellar spectra, which are formed by using a device called a “diffraction grating” to split the electromagnetic radiation emitted by stars into a rainbow of colors interspersed with dark lines. Spectral lines had also been observed when elements were heated to incandescence in a laboratory. By comparing stellar spectra to the spectra of heated elements, astronomers could discover the chemical composition of the stars.

Pickering charged his observers—both at Harvard and at an observatory built by Harvard in the Southern Hemisphere—to photograph stellar spectra and instructed his ladies to study the glass plates. Poring over the “little pieces of heaven” with a magnifying glass, Williamina Fleming, who had originally been hired by the Pickerings as a maid, devised a classification system of stars based on their spectra. “The Draper Catalogue”—consisting of 10,000 stars divided into 15 classes—was published in 1890. Her colleague Antonia Maury, a niece of Henry Draper, classified the stars by a different method seven years later. Annie Jump Cannon, the first woman given the privilege of observing stars through the telescope, combined the best features of each method to devise the stellar classification system she published in 1901. Cannon’s system is still used today.

The women at the Harvard Observatory helped discern the chemical composition of the stars, their speed and relative temperature, as well as the existence and properties of binary, or twinned, stars. Their work suggested that stars evolve through different stages and that the universe is vaster than ever imagined.

Henrietta Leavitt —using what she called her “fly spanker,” a tiny lens studded with images of model stars, set into a metal rectangular holder—found nearly 2,000 “variables,” stars whose brightness fluctuates. In 1911 she noticed that the brightest variables took the longest time to cycle through their changes—a correlation known today as Leavitt’s Law. Cecilia Payne, who earned the first Ph.D. in astronomy at Radcliffe, discovered that hydrogen was the most abundant constituent of the stars, a conclusion so revolutionary that she was encouraged to play it down in her 1925 dissertation.

In the 1940s, the Harvard Observatory began to avail itself of the new IBM computing equipment. As Ms. Sobel lyrically remarks: “The days of the human computer were numbered—by zeros and ones.”

Ms. Sobel writes with an eye for a telling detail and an ear for an elegant turn of phrase. In a single sentence she captures how the women both maternally nurtured and intellectually dominated their male colleagues: “Annie Jump Cannon could bake a batch of oatmeal cookies for a meeting of the Bond Astronomical Club and then lecture authoritatively to the assembled about her latest findings in spectroscopy.” Such flourishes make Ms. Sobel’s book a joy to read.

In 1956, after nearly 25 years at the observatory, Cecilia Payne (now Payne-Gaposchkin) was named a full professor—the first woman at Harvard to be promoted to that rank. She confided to a party of Radcliffe astronomy students: “I find myself cast in the unlikely role of a thin wedge.” Her salary of $14,000 was a king’s ransom compared to the 30 cents an hour that some of her female colleagues had earned for studying the glass plates but far below that of her male peers. While they left to their daughters and granddaughters the fight for true equality, the ladies of the Harvard Observatory had won the battle for inclusion in the scientific elite.

Curiouser and curiouser: A cup of tea with Oliver Sacks

“The Zoo” by Isobel Charman
Scroll to top